Did South Africa just have its hottest day ever? Experts remain divided

Save the Children: Climate Crisis Causing Hunger for Millions of Africans

Letter from Africa: Is Kenya building bridges to nowhere?

No Result
View All Result

Did South Africa just have its hottest day ever? Experts remain divided

The village of Vioolsdrif in the Northern Cape is claiming to have experienced the hottest day ever recorded in South Africa. But the debate rages on.

Last week was hot. And on that note, we’ll be collecting our award for “biggest understatement of the year”. A punishing heatwave swept across the country in brutal fashion, scorching six of South Africa’s provinces. However, we *might* have just seen the hottest day ever recorded in the country last week. Depending on who you believe, anyway…

Did South Africa experience it’s hottest day ever in November?

Both Planet Earth and Storm Report were the first to suggest that Vioolsdrif in the Northern Cape broke a record almost 100 years old. It’s alleged that temperatures soared to an incomprehensible 54C in the village sitting on the Namibian border, right at the tip of the N7 highway.

That would smash the previous high of 50.0C by a wide margin. One source from the SA Weather Service has suggested the readings are true, giving credence to the claims that the hottest day in South African history occured last week. However, the validity of this data faces some serious questions.

Saws have already downgraded the official highest maximum temperature of the day to 50.1C. This would be just enough to make it the hottest day on record. Even then, the reading has been classed a preliminary – there’s a chance that all the fanfare over a new, yet terrifying record has been misplaced.

Etienne Kapikian is a French meteorologist. He was tracking the startling developments in Vioolsdrif, but things didn’t quite add up for him. He dismissed some of the readings as “impossible”, and suggested that sensory errors – as well as faulty dew points – had given Saws some unreliable data: According to him, the temperature could have “only” reached an optimum height of 47C – falling short of the record. 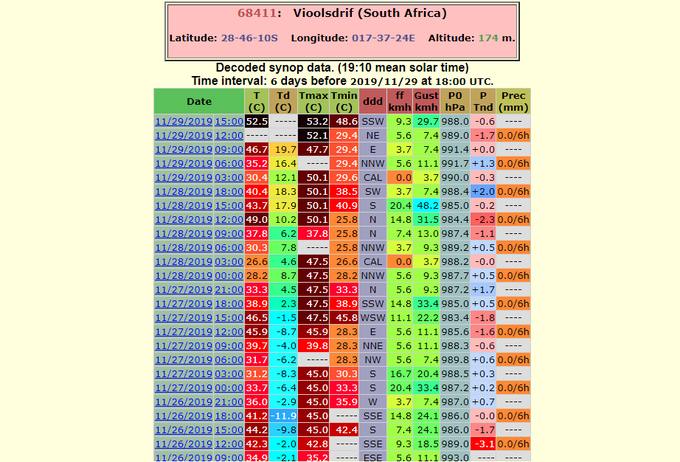 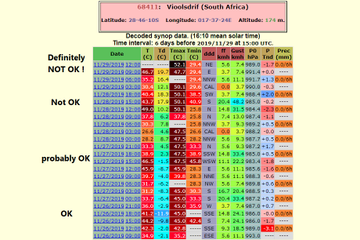 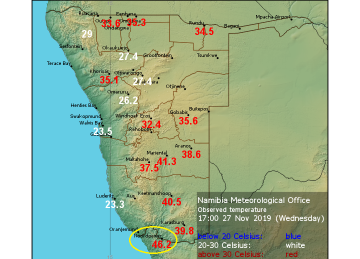 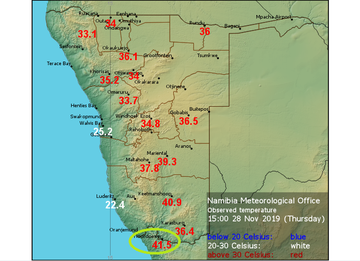 Hottest day in South Africa – what the history books say:

Our trusted forecasters at Ventusky also have no record of the temperature soaring above 50C. A myriad of climate activists have also dismissed the suggestion that Friday 29 November was the hottest day in South Africa.

Officially, that honour still belongs to the Eastern Cape town of Dunbrody, in the Sundays River Valley. It’s been 97 years since the mercury tipped 50.0C, marking the first and only time (confirmation from Vioolsdrif pending) that the temperature rose to the half-century mark in Mzansi.

If you’re in the mood for a constant scorcher, you’ll need to move to Letaba in Limpopo Province, just South of Tzaneen. Saws have it marked as the hottest area of the country, with an average maximum temperature of 35C.

However, Upington in Northern Cape can also lay claim to being one of South Africa’s hospitable infernos. Some sources place Upington with an average maximum temperature of 36C. If you visit either of these towns, make sure you bring the factor 10 000.

Dunbrody may have tickled the 50C mark, but it falls short of being one of the hottest temperatures ever recorded on the planet. The number one spot belongs to Al-Aziziya in Libya. It measured a blood-boiling 57.7C on 13 September 1922 – the same year the Eastern Cape broke the domestic heat records.

Save the Children: Climate Crisis Causing Hunger for Millions of Africans

After growing its lending business in West Africa, emerging markets credit startup Migo is expanding to Brazil on a $20 million...

Africa can learn from China how to beat poverty

No Result
View All Result